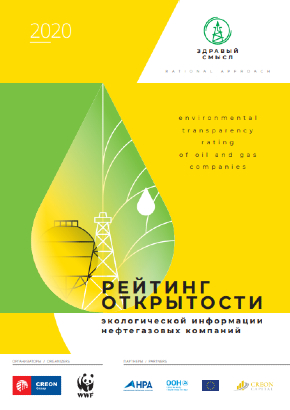 The World Wildlife Fund (WWF-Russia) and CREON Group presented the results of the 2020 Environmental Transparency Rating of Oil and Gas Companies. This year numerous accidents and spills caught much attention. At the same time, environmental transparency of business increased, while the final calculation saw the top three leaders changed. The rating report is being conducted with the support of the European Union.

Experts from WWF Russia, National Rating Agency NRA and CREON Group have thoroughly studied how the information about emergencies and oil spills was being disclosed. “We will remember 2020 for resonant accidents. In this regard, we will put even more efforts in developing the system of public monitoring and control, including the tools within our rating, in order to help reduce the number of emergencies in Russia,” said Alexey Knizhnikov, Head of the Environmental Corporate Responsibility Program, WWF Russia.

Transparency in the Eurasian oil and gas sector is growing

At the same time, the rated companies’ environmental transparency continues to grow. 2020 became a record year in terms of competition for becoming the best. Never before have the top five among Russian oil and gas companies been separated by such an insignificant difference in overall score. Small reductions in scores for one or two criteria played a decisive role in the overall calculation, and the intense rivalry of oil and gas companies for environmental transparency led to a complete change of the TOP-3.

Over seven years of rating’s calculation in Russia, the first three places belonged to either Sakhalin Energy, Surgutneftegaz, Gazprom, Zarubezhneft or Exxon. This year, Zarubezhneft becomes the leader in the rating, Surgutneftegaz takes the 2nd place, and Lukoil is the 3rd. Among Kazakhstani companies, for the third year in a row, the leadership is held by KazMunayGas, in the second place is North Caspian Operating Company and in the third place is Karachaganak Petroleum Operating. BP is the leader among Azerbaijani companies.

This year, the organizers also noted the progress of Gazprom, which demonstrated the best score growth in disclosure. The concern moved up two positions to 8th, displacing Rosneft and Gazprom Neft. Companies dropped one position, although they increased the detection rate of emergencies. NOVATEK and Tatneft also significantly improved their environmental performance.

“The growing competition among the rating participants for leading positions and an active dialogue between representatives of the oil and gas industry and the public are indisputable evidence of how efficient this rating is in increasing the transparency of the entire industry in terms of disclosing environmentally significant information,” says Viktor Chetverikov, Managing Director for Development Projects, NRA.

Green deal a trend for Eurasia

The importance of international cooperation at the stage of transition to a green economy was emphasized by Aleska Simkic, Deputy Head of the EU Delegation to Russia and Fares Kilzie, Chairman of the Board of Directors of CREON Group and co-initiator of the rating.

“Our rating has become an international platform that clearly demonstrates the efforts of Russian oil and gas companies. Its results show very clearly that Russian companies understand and accept the full responsibility of the energy transition that has begun in Europe,” says Fares Kilzie, Chairman of the Board of Directors of CREON Group and co-initiator of the rating. “There is a big discussion in the European Union about what the vector of the energy transition will be. In order to formulate and finally define this path, Europe needs a dialogue with a strong and big player. And this player is Russia. Without a bilateral dialogue, both sides risk being trapped in populist statements or even decisions. And without clearly coordinated actions, Eurasian suppliers and their European counterparties may find themselves in a dead end. That is why Russian companies need feedback via our rating from Europe at the highest level,” underlined Fares Kilzie.

Aleska Simkic repeated in her intervention the European credos and strategic vision in relation to climate change and underlined that any effort toward a greener economy relies on a concerted effort by governments, businesses, the civil society and the science community. „A transition to a climate neutral European continent is a challenging but feasible and even compatible with growth and that the business community, including the energy sector should be a leading force in this transition”, said Aleska Simkic. In relation to non-financial reporting of corporations she stressed: “A new generation of corporate reporting that embraces environmental risks is of high importance and relevant. This gives investor confidence and allows a company to calibrate its practices and directly contribute to environmental goals”.

WWF Russia also noted positive trends in the development of the Russian fuel and energy sector. “The Government of the Sakhalin Region has taken the initiative to develop a plan for achieving climate neutrality in the region. And the Russian economic development strategy for the Arctic, which was approved in October, sets out the priorities for replacing oil fuels with LNG and renewable energy sources. In this regard, we will supplement the methodology for calculating our rating with new criteria that will follow innovative trends,” said Alexey Knizhnikov.

The ratings emphasize industrial accidents and incidents, and the extent to which companies share such information in a timely and complete manner. When calculating the ratings, maps of emergency and controversial environmental situations are being prepared. Since 2019, the collection of such data has been carried out within the framework of the People for Nature project, implemented with the support of the European Union. The objectives of the project are to involve the public in environmental protection. Thanks to the project, non-profit organizations in the regions have joined the monitoring of environmental incidents. Specialized NGOs monitor and analyze the impact of industrial enterprises, participate in environmental expertise, develop and strengthen the system of public environmental control.

Rating methodology will be tested in corporate practice

Over the seven years of its existence, the rating has established itself among oil and gas companies as a tool for public observation and self-control. Next year, the rating methodology will be tested in corporate practice as an internal tool to improve transparency and efficiency. “One of the most significant practices in Zarubezhneft JSC is increasing the transparency of production activities at all our assets, including abroad. In 2021, we plan to assess the application of the methodology for rating the openness of environmental information of oil and gas companies operating in Russia to the foreign assets of Zarubezhneft JSC,” announced Elena Compasenko, Head of Labor Protection, Industrial Safety and Environmental Protection of Zarubezhneft JSC. The first asset on which a pilot assessment of the application of the methodology will be carried out will be Andijanpetro LLC, a joint venture between Zarubezhneft and the Uzbekneftegaz state company of Uzbekistan.

​Zarubezhneft took the first place in the rating of 2020 among Russian companies, having improved indicators in the section on environmental impact by 0.05 points. Surgutneftegaz showed a more significant increase in disclosure rates in all three sections, moved up three positions and took second place (+0.13). The third place went to Lukoil, which also managed to increase its disclosure in all sections (+0.02). 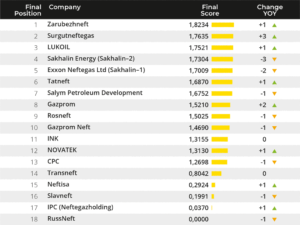 At the same time, Sakhalin Energy, which held 1st place in the rating for several years in a row, lost 3 positions at once and dropped to 4th place, although its overall score barely dropped (-0.08). The same dynamics was shown by Exxon NL: although the company’s score decreased by only -0.05, it moved from 3rd to 5th place.

The best performance was surprisingly demonstrated by Gazprom. The company increased its score by 0.31 at once and moved up two positions to the 8th position, displacing Rosneft and Gazprom Neft, although both companies significantly improved the detection of emergency situations. 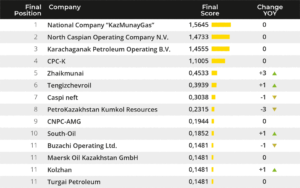 The four leaders among Kazakhstani oil and gas companies have not changed: NC KazMunayGas (1), North Caspian Operating Company (2), Karachaganak Petroleum Operating (3) and CPC-K (4). But, as in the case of Russian oil and gas companies, the competition for the top positions has increased significantly. CPC-K came close to the TOP-3, significantly increasing the disclosure rate by 0.28 points, and Zhaikmunai was able to move up three positions at once to the 5th place, although the growth was only +0.06 points. BP is the leader among Azerbaijani companies.

​The Rational Approach Project with its independent Environmental Transparency Rating of Oil and Gas Companies was initiated by CREON Group and the World Wildlife Fund (WWF Russia) in 2014. The traditional partner of the rating is NRA (National Rating Agency). The long-term objectives of the project are to establish environmental transparency in the oil and gas industry in the Eurasian space and assist it in the transition to a sustainable development model taking into account ESG factors (Environment Social Governance). The rating examines the environmental transparency of oil and gas companies with an oil and gas condensate production volume of over 1.5 million tons per year. In 2017, the geography of the rating was expanded by oil and gas companies of Kazakhstan, and in 2019 by companies from Azerbaijan. The Rational Approach Project is being implemented with the support of the United Nations Environment Program (UNEP) and supported by the People to Nature Program of the European Union and the Ministry of Energy of the Russian Federation. 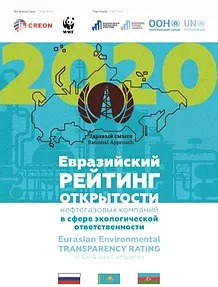 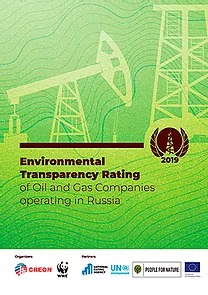 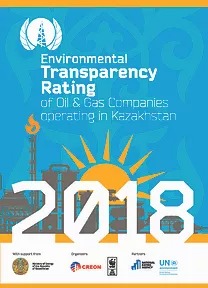 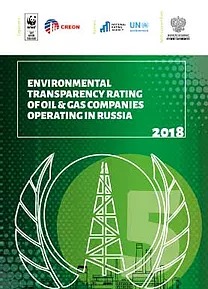 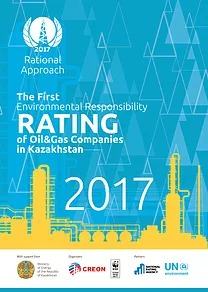 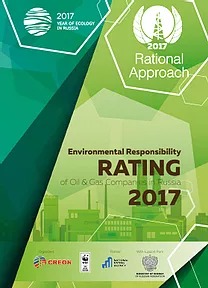 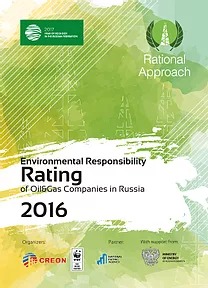 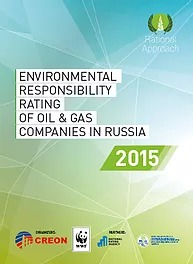 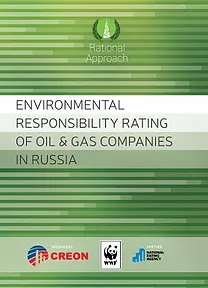 читатьскачать
Menu
Send this to a friend